EPS surpasses its ambitious Around the World Fundraiser goal

In April of this year, Singapore underwent a self-imposed ‘Circuit Breaker’ to curb the spread of the COVID-19 virus. This eight-week social distancing exercise proved to flatten the curve, but it meant employees were isolated in their homes. When ship staff movement started to become regulated, EPS knew something had to be done to keep its workforce connected, engaged, and motivated. The concept of walking 40,075 km, which is roughly around the world, was intended to be internal, but then the Singaporean government announced its SG Fortitude Budget, designed to stimulate the economy. One component of the budget was a dollar-for-dollar matching scheme for approved fundraisers. That meant by turning the teambuilding exercise into a public fundraiser, a significant amount of money could be raised for those in need. Thus the EPS Around the World charity event was born.

Seven charities were selected, and an in-house committee went to work to plan the event. What happened next, no one could have predicted. The event took on a life of its own as tens, then hundreds, then thousands of people joined the EPS Strava Clubs to register their kilometers. The support from corporate sponsors was overwhelming, and within a matter of weeks, there were hundreds of thousands of dollars in pledges.

The event kicked off on December 7, 2020, with a bang. From the onset, recorded kilometers began pouring in from all over land and sea. Seafarers onboard ships were able to virtually walk together with their families on shore while members of the EPS Community, friends, and sponsors from various countries collectively walked, ran, and cycled. On Friday, December 11, the event culminated in a Move Together Day, where every participant made one final push to reach the target of 40,075 kilometers. By the end of the event, the target was shattered when 3,200 participants recorded 2,700 activities, racking up a collective 72,400 kilometers with 50 sponsors pledging over S$1,050,000.

EPS CEO Cyril Ducau said, “ The announcement of the fundraiser as part of our ongoing EPS Cares initiative was met with cautious optimism. Everyone believed in it and wanted it to work but felt the goals of 40,075 km and one million Singapore dollars were a bit lofty. But in true EPS fashion, our people bought-in to the ambitious idea and focused on execution, and the results speak for themselves. I am beyond proud to be part of the EPS Community and humbled by the external support we received. I’m also extremely grateful that at the end of the day, this teambuilding exercise has produced significant financial support for seven amazing charities.”

Congratulations to everyone who supported this initiative and helped make the impossible possible. 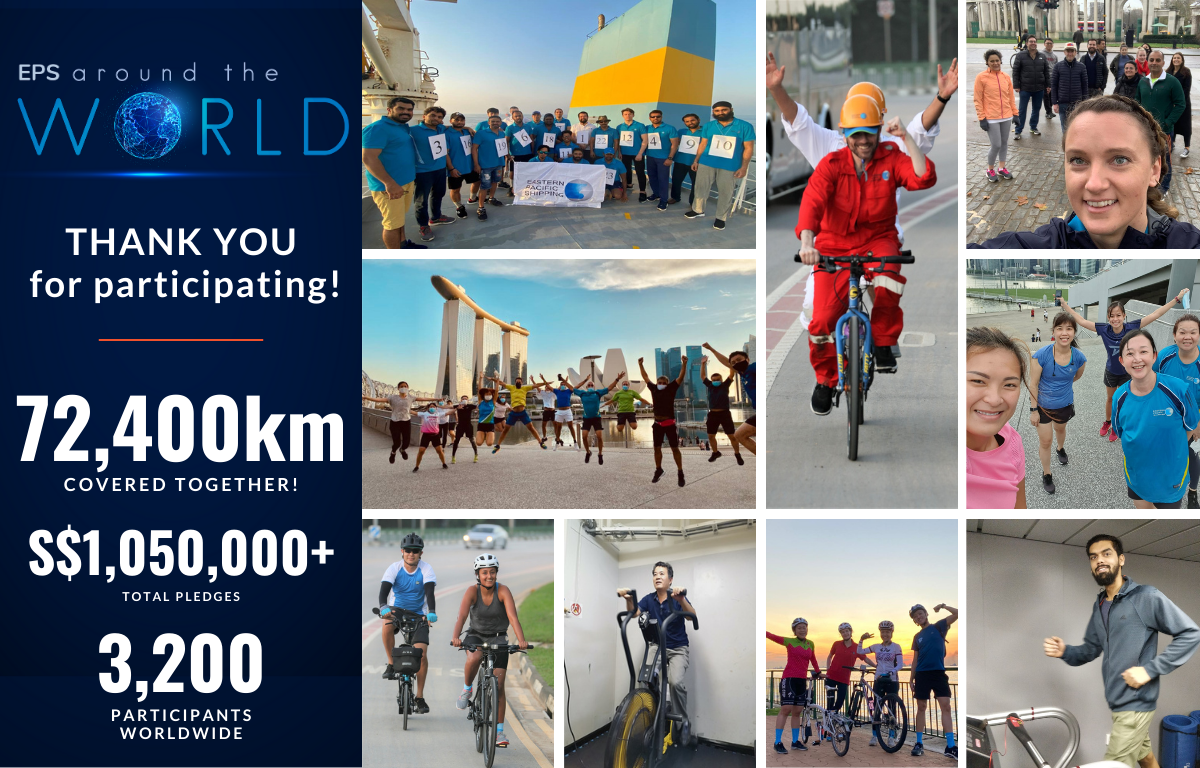