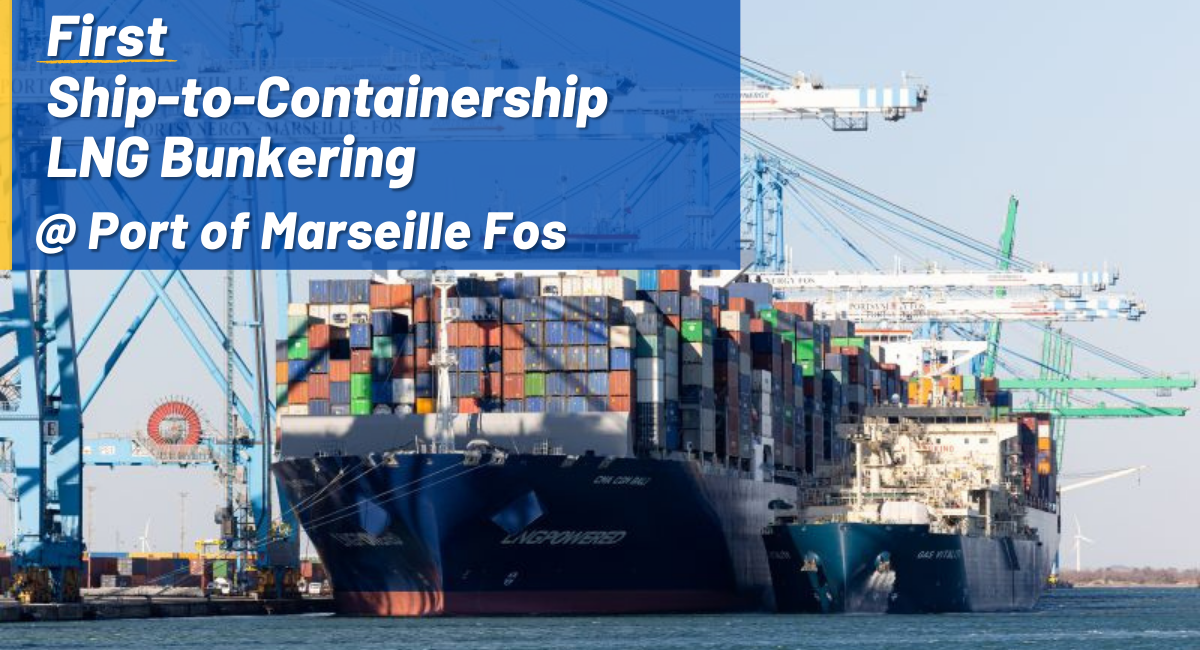 CMA CGM BALI, a 15,000 TEU LNG-powered containership is deployed on the MEX 1 service, connecting Asia and South Europe. She is being refuelled by TotalEnergies’ Gas Vitality, the first LNG bunker vessel based in France, with around 6,000m3 of LNG, by means of a ship-to-ship transfer alongside the Eurofos container terminal, while the containership carried out cargo operations simultaneously.

This entire operation underlines a solid collaborative teamwork across the French maritime industry, the excellence of its value chain and the involvement of local port authorities to enable the vessels’ safe operatorship.

LNG, a concrete commitment to energy transition in shipping

LNG is the most advanced solution when it comes to preserving air quality, a major public health challenge for communities in coastal areas and port cities. It reduces sulfur oxide emissions by 99%, particulate matter emissions by 91%, and nitrogen oxide emissions by 92%. A LNG-powered vessel also emits up to 23%1 less greenhouse gas emissions than conventional fuel-powered systems.

In November of 2017, Rodolphe Saadé, CMA CGM Group’s Chairman and Chief Executive Officer, decided to make CMA CGM the first ship-owner in the world to equip its flagship 23,000-TEU vessels with engines using liquefied natural gas (LNG) – a first in the history of shipping for Ultra Large Container Vessels.

CMA CGM has chosen TotalEnergies as part of a major industrial partnership to supply them with gas in Rotterdam, Singapore and Marseille. Thereby making CMA CGM the initiator in structuring a genuine LNG field of excellence in maritime transport. Marseille is the first LNG bunkering hub in France for shipping, and CMA CGM’s third one to be created after Rotterdam and Singapore.

TotalEnergies has actively invested in LNG infrastructure, critical to support its shipping customers’ uptake of LNG as a marine fuel.

Since November 2020, TotalEnergies has been operating the 18,600-m³ Gas Agility at the Port of Rotterdam and completed the first LNG bunkering operation of the CMA CGM JACQUES SAADE, the largest dual-fuel LNG-powered containership in the world. Together with the Company’s second-chartered LNG bunker vessel, the Gas Vitality, both vessels demonstrate its commitment to make LNG bunkering capabilities readily available in key European hubs. In 2022, TotalEnergies will also commence operations of a third LNG bunker vessel to serve Singapore, where the Company has been awarded a LNG bunker supplier license for a five-year term starting January 1st, 2022.

As part of its strategy to reduce greenhouse gases emissions in maritime transportation, TotalEnergies has in parallel chartered two VLCCs (Very Large Crude Carriers) and four Aframax-type vessels, all equipped with LNG propulsion, which will be delivered in 2022 and 2023 respectively.

First BioLNG production project at the Port of Marseille-Fos

LNG as a marine fuel also lays the foundation for the introduction of greener bioLNG in the future. As a next step in the development of lower-carbon LNG for maritime transport, TotalEnergies, CMA CGM, Elengy and EveRé announced a joint study to create France’s first production unit for liquefied biomethane (BioLNG) at Port of Marseille Fos. BioLNG will be produced by converting the biodegradable part of household waste from Marseille Provence region and used primarily for CMA CGM’s LNG-powered vessels.

Cyril Ducau, CEO of Eastern Pacific Shipping said, “EPS is pleased to be part of this landmark operation as it confirms the importance of LNG in the industry’s energy transition. In addition, the operations in Marseille prove that the needed infrastructure to facilitate LNG bunkering is already in place. By teaming up with environmentally conscious partners such as CMA CGM, TotalEnergies, and the Port of Marseille, shipping companies have the ability to significantly lower their emissions today while developing alternative solutions for tomorrow. EPS is proud to have a series of LNG-powered vessels chartered to CMA CGM, and we are excited that this will be the first of many successful LNG operations in France”.

Christine Cabau, Executive Vice President Operations and Assets of the CMA CGM Group said “This LNG bunkering operation is an important milestone for our group, in many ways. It sets France and Marseille maritime and port cluster on the frontline for the decarbonization of shipping. It enhances LNG solutions as the first step of a broader industrial strategy that will take us to alternative fuels such as biomethane and synthetic methane. It is also another proof of the commitment of CMA CGM toward Marseilles and its region. We are very proud to act both globally and locally to develop sustainably our business”.

“TotalEnergies is delighted to successfully complete Marseille’s first LNG bunkering operation of a containership via the Gas Vitality. Her deployment underscores the Company’s commitment to support the French port’s ambition to be an LNG bunkering hub for the Mediterranean region,” said Jérôme Leprince-Ringuet, Vice-President Marine Fuels at TotalEnergies. “This landmark operation also demonstrates our continued support to the growing role of LNG in shipping’s energy transition. In line with TotalEnergies’ climate ambition, we will continue to work hand-in-hand with our industry partners to develop and scale up new, lower-carbon and ultimately, zero-carbon fuel solutions for shipping.”

Hervé Martel, CEO, Port of Marseille Fos, said, “This is a new milestone for the port of Marseille Fos, which is undoubtedly an essential LNG hub in the Mediterranean. The energy transition operated at Marseille Fos involves all the partners. The port is resolutely committed to this path: that of environmental excellence. This operation is proof of effective joint work and an additional attractiveness argument for our port.”

Sandra Roche-Vu Quang, CEO of Elengy, said, “This first operation is a corner point for the development of the energy transition services for the maritime sector in the East Mediterranean. This is the result of strong and well-established co-operation between all the industrial stakeholders and the port of Marseille.”