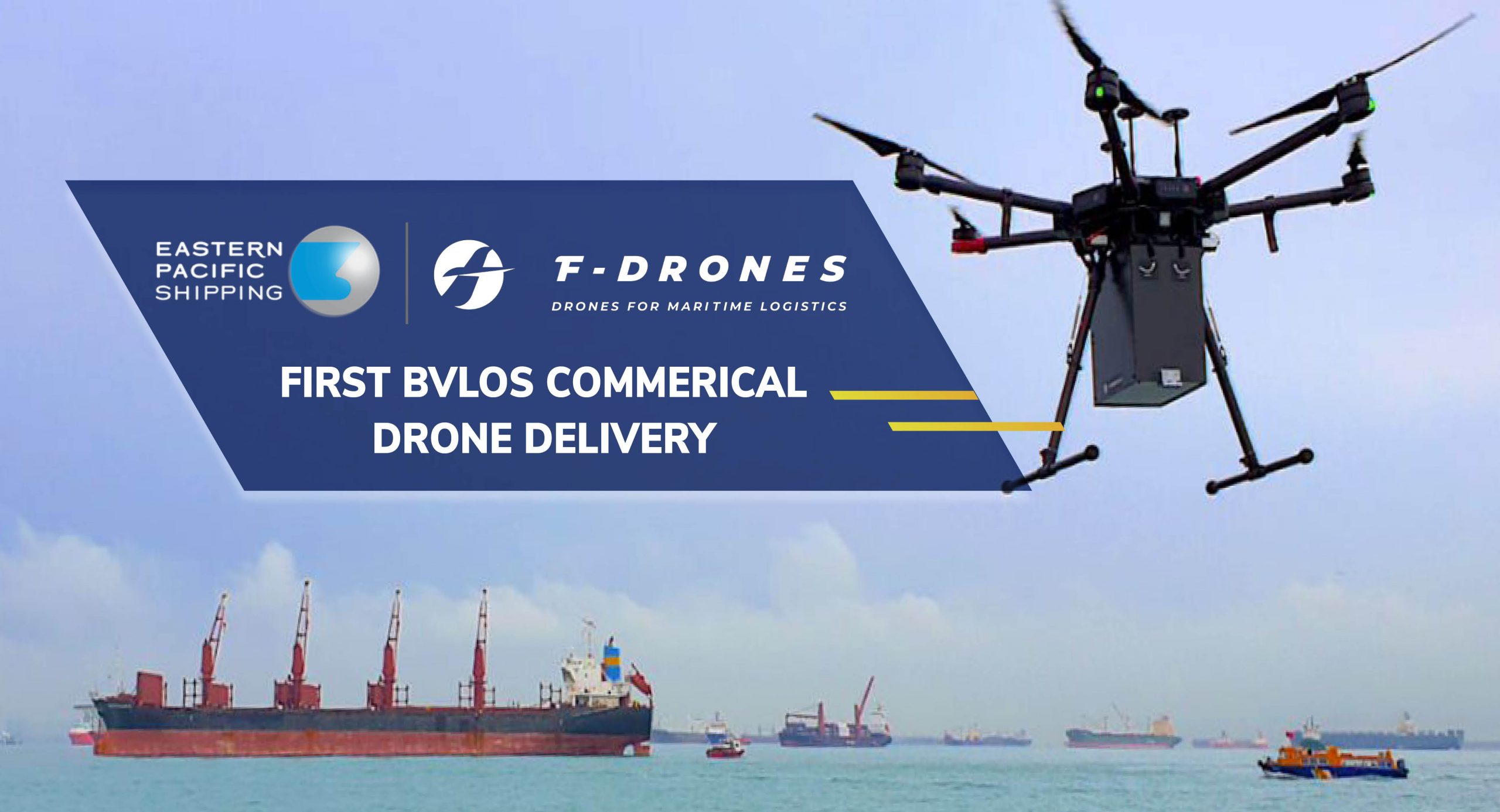 Singapore’s first BVLOS drone delivery service has started, with the first parcel containing 2kg of vitamins dropped onto a ship anchored off the island on April 19.

Each drone can take up to 5kg of supplies and travel up to 5km offshore each way.

F-drones is the first company to receive authorisation from the Civil Aviation Authority of Singapore (CAAS) for such deliveries.

Trips take less than 15 minutes on average, offering a greener and faster way of transferring supplies in busy ports.

Diesel-powered launch boats are currently used for such deliveries, of which there can be more than 100 a day in Singapore.

It can take more than two hours for the boats to make trips of a similar distance, including going through the logistical processes. Choppy seas can also cause delays.

While these vessels can carry up to two tonnes of cargo, around 15 per cent to 20 per cent of deliveries in ports around the world are for payloads of under 100kg. This explains the appeal of drone deliveries, said F-drones.

And while the adoption of drone deliveries over land has been slowed by various obstacles globally, few of these factors affect deliveries over sea to ships, said the firm’s co-founder and chief executive Nicolas Ang. “People in cities may not like drones flying over their heads because of the noise, for example, but that’s not an issue when flying over water.”

F-drones drew interest from multiple shipping firms when it launched last year, but Singapore-headquartered EPS was the only one willing to commit to a partnership before any trials were conducted.

The deal signed between the two companies is for an initial one-year contract of 200 deliveries.

EPS head of open innovation Gil Ofer said he was convinced by F-drones’ plans to build a bigger drone that will eventually be able to carry bulkier items such as drill bits and 40-litre gas tanks over longer distances.

“Another company we spoke to said the maximum it could (carry) was 2.5kg… but once we realised F-drones was building a much more powerful drone, that’s when things got interesting,” said Mr Ofer, who spearheaded EPS’ launch of a maritime tech start-up accelerator here last November that F-drones is a participant of.

While F-drones’ current drone was purchased, it has developed its own drone which can carry up to 5kg of supplies over a distance of up to 50km – enough to cover most of Singapore’s waters, as well as some stretches that are off port limits.

Commercial operations with this prototype are slated to begin at the end of this year.

F-drones’ final product will be able to carry a load of up to 100kg over 100km, but this model is expected to be ready only by the second half of next year. A further 18 to 24 months will be needed to complete the certification process required by the CAAS for drones heavier than 25kg, said Mr Ang. F-drones’ current drones are below that weight.

Mr Ofer said the initial drone flights have already been greeted favourably by EPS’ seafaring employees. “They’ve been doing the same monotonous jobs for many years, and to see them get so excited at this futuristic technology landing on the vessel… it makes us very proud.”